After Super Junior’s arrival in Manila and internal discussions with their company and event organizers, the concert was officially postponed. In a statement provided by the company, they informed fans of the decision but said the members still wanted to greet their fans right away. 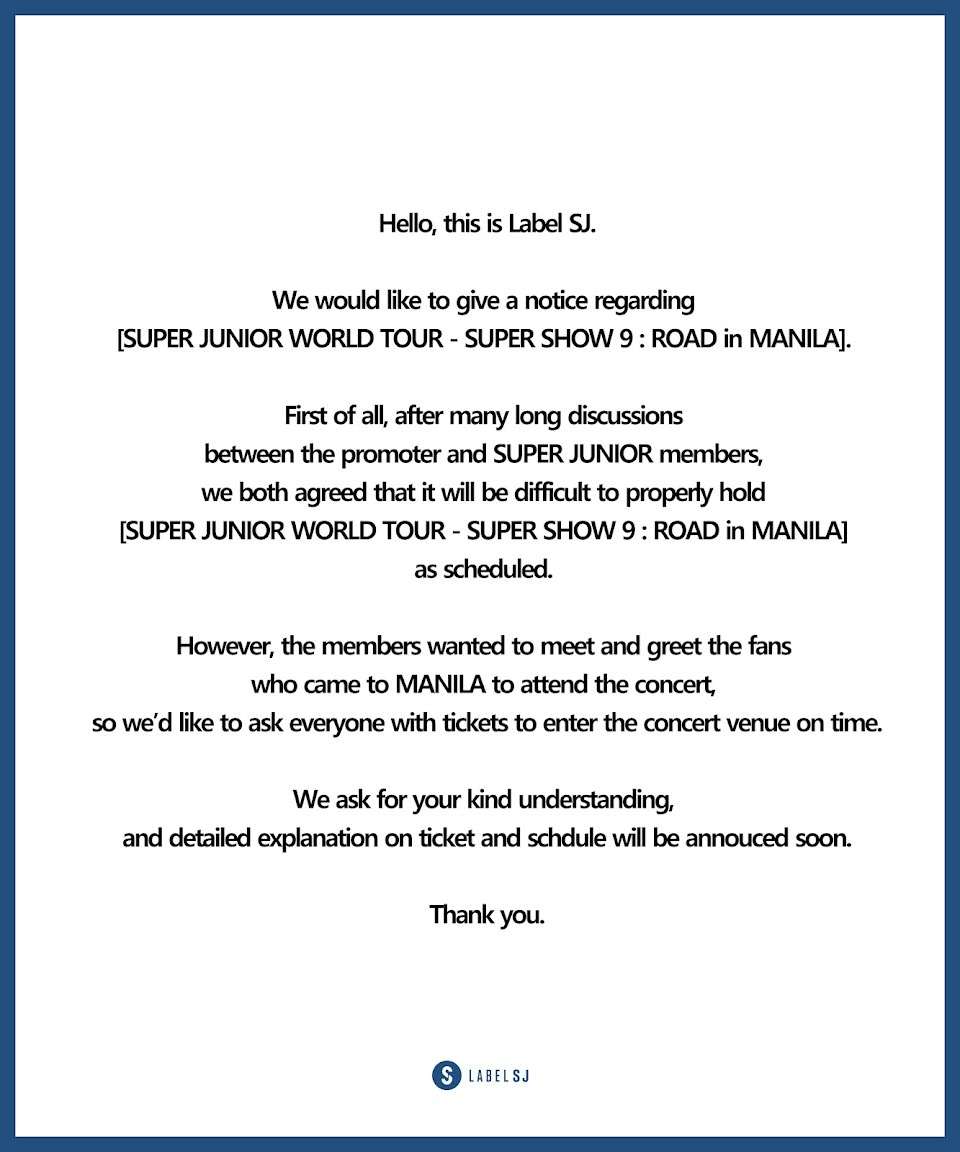 With great professionalism and love for their fans, Super Junior appeared on the scene and addressed the audience, expressing gratitude for his fans’ understanding.

“I hope this doesn’t dampen your energy for too long. The thing is, back in Korea, we discussed whether to move to Manila for a while. Finally, we agreed to come again to greet the fans who were waiting for us. Even when we arrived in the Philippines, we kept discussing what to That we do, late at night, around 3-4 a.m. We think Super Show is a place of happiness, fun and hope.

So we do not “cancel” the offer. We put it off to make sure we can really give you the perfect amount of happiness, enjoyment, and hope. We hope you can see it as you bought tickets for this show early on. We originally planned to play only one night in Manila. But we spoke to the promoters and asked when we got back that we’d like to play for two nights. It’s only right that we show you our gratitude in this way… We also understand that by canceling the show, we’re causing a lot of inconvenience to a lot of people. So, to keep our dear ELFs and employees happy, we promise to come back as soon as possible.

When we get back, Siwon will be there. Eunhyuk will be by my side to confuse everyone again. In a way, we were lucky to have more chances to see ELFs here in the future. You’ve been more beautiful since the last time we were here. And for the great fans, we have prepared something special. We wish happiness to all of you only. And we feel bad leaving the stage without playing anything. So we’ll sing a few songs, hoping to keep our love strong forever. this is my wish. » – Leeteuk

I love you always and forever, Tweet embed 💙 We will wait for your safe return to the Philippines# SS9inManila # Super Junior pic.twitter.com/Nabam5JU7E

Korean netizens have nothing but praise for the members’ decision to postpone the concert in the Philippines. The members insisted on appearing on stage to meet and greet the fans who showed up despite the postponement notice on the same day. Many netizens from many online communities shared their thoughts on their decision.

ELFs who were anticipating the concert responded with incredible understanding, wanting to make sure the members took the time they needed to grieve and be with Eunhyuk. After Shindong at the venue apologized for the unexpected delay, the audience began chanting “It’s all right” in Korean, showing their love for the group.

Shindong: “I didn’t know so many of you would come today.. I’m really sorry”

Appreciate the attendees here like, you see fans from all over the country and the world but not a single amount to complain, we all wait patiently from our queues. A gloomy atmosphere but they are all sympathetic. This is ELF! We love you Tweet embed 💙 # SS9inManila # Super Junior pic.twitter.com/gNjcaG37EN

Not only did the members take the time to give speeches in front of their fans, they also performed three songs.

Fans praised the group for their performance during such a difficult time and showed their gratitude for Super Junior’s dedication to ELF. Even when Super Junior arrived at the Manila airport, Leeteuk was filmed running to greet his fans who were waiting for their safe arrival.

leeteuk just goes out of his way to greet the fans who waited until almost midnight 😭😭😭 we don’t deserve his kindness #KeepGoingtoPH_SJ # Super Junior # SS9inManila pic.twitter.com/qJPmKwjRf6

On the other hand, Heechul, who has stayed in Korea, told fans that Sungmin, Kangin, and himself are standing by Eunhyuk, making sure he is surrounded by support.

The veteran idol group has become like family over the past 17 years, and they’re still showing that ELFs are their family too.